We recently returned to visit one of our garden designs in Wimbledon, a period property loving renovated by the current owners that initially had a large but overgrown garden. After initially clearing lots of overgrown brambles and tired shrubs the garden design survey revealed that the plot was far more spacious than initially thought. The garden had a number of established feature plants, a mature yew hedge that formed a stunning evergreen back drop to the garden and some heritage Rose bushes. We were commissioned to carry out a full re-design of the garden that would be carried out in two stages as work progressed on the interior refurbishment of this beautiful detached family house. Our design proposal included survey, plans, visualisation, planting and lighting design.

Our clients wanted to preserve the established ornamental plants in the garden and incorporate these into a sympathetic planting scheme with structure and year round interest. The property is also situated in a conservation areas and many of the plants, trees and hedges in this part of Wimbledon are protected, they form a key part of the identity of this special area of Merton Park where the individually designed ‘arts and crafts’, domestic revival and Queen Anne style cottages and houses sit perfectly behind established holly hedges and oak gates. 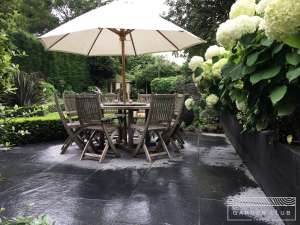 To add interest to the existing evergreen structure of the garden the space was designed around 3 circles that lead you through the garden and define each area, breaking up the strong geometric lines of the garden. This adds a very subtle update to the design of the garden using traditional evergreen box hedges in 3 layering heights that build up towards the back of the garden where the planting scheme includes larger shrubs such as Cercis canadenis, Hydrangea, Acer palmatum and Camelias. These are also shadier areas of the garden and we planted taller flowering herbaceous plants between the shrubs that would tolerate the shade and add additional interest including Actaea racemosa ‘Brunette’, a perennial that has a deep burgundy lace cut leaf and spires of delicate tall white/pink flowers in early autumn.

The garden landscaping that we undertook in this Wimbledon garden included a large new stone terrace, raised beds, installation of children’s play equipment, fencing and foundations for the installation for a summerhouse. We have an in house team of accredited landscape contractors and use a range of specialist contractors for more complex works such as the garden lighting and automated irrigation system.